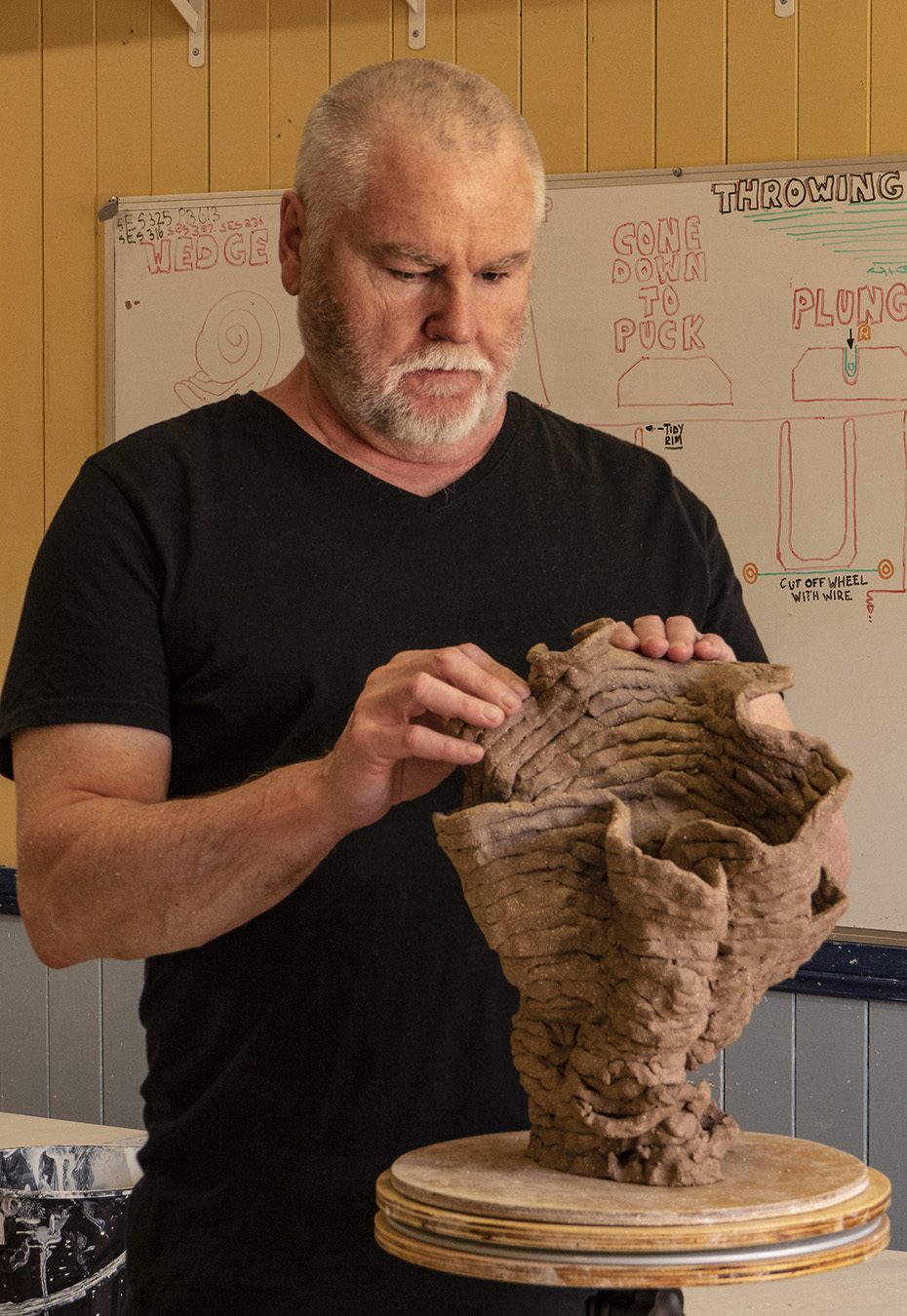 The overriding themes, and thus, the titles, of my work evolve in the forming, texturing and colouring of the clay. I like to start a piece with an open mind to wherever it will go. That’s the challenge, inspiration and ultimate satisfaction in the process of creating work that is hopefully different in a notable way. I do intrinsically know that a piece will evoke earthy, organic, fluid, and dare I say, sensual responses – at least in me. As an artist, this is what draws me to clay. Its feel and response in the hands and eyes is very rewarding all the way to the final work. The eventual symbolism derives from this personal exploration.
I would like the viewer to explore with me. Look at a piece from all possible angles to discover the bold swashes or hidden nuances. Keep going for back for a new look with open eyes and adventurous fingers (careful, sometimes sharp). You might find something of interest that even I haven’t divined.

Raft trip down the Colorado through Grand Canyon. Absorbing the extraordinary grandeur, sweep and viariety of formations, colours and texture in the cliffs, rocks and river. Whever there was water the rocks showed life, sculpting and mineral colours, like azure or turquoise. Browns to reds, blacks to creams in strata. Many ancient lava flows.
Presence of the Pueblo people who lived in the canyon sides, including the remnants of graineries, improvised bridges across ravines from hundreds of years ago.
Work built up from layers of loosely shaped and intertwined coils to show the eternal movement and shaping of the earth from erosion, providing chasm-like pockets and caves that imply settlement, temporary shelter or devotional sites.
Frequently use squrish coils that I twist in both directions to provide undulation and contour, and imply movement.
I use a self-built rotating sculpture stand on a pedestal.
The clay is Buff Raku Trachyte fired to cone 6 in ans electric kiln.

SINTERING FROM COILS and COILING FROM CINDERS.
These two pieces originated with Sintering from Coils. Initially I wanted to create a piece that played with the meaning of the word coil. Thus we see conventional coils as used in pottery, coiled wire, coiled snakes – all of which symbolise movement, process or life in themselves, especially with the many tips (or heads) emerging from the form.
Then I started Coiling from Cinders, my mind was brought to the rendering of a rising phoenix, the traditional symbol of renewal from the ashes. I also shaped the coils in the body as if they were swirling. Underneath the cantilevered “roof” I molded a small vignette of circled stones to imply human interaction in mythology.
With the suggestion of my wife, who saw wire around a farm post in Sintering, I played with the idea of the titles merging as I airbrushed black stain on the column to represent the residue of burning, as in ever-present Australian fires.
Naturally. the phoenix required vibrant reds and yellows in response to the ashen look of Sintering.
The titles came to me as a play on words evoking the cycle of death and life, fire and renewal, desperation and hope, while remaining true to the use of the coils.
Again, I used twisted square coils with BRT at cone 6.

SYDNEY ROCKET ORCHID
When I began the piece (this one my second attempt after failure), I wished to create a curling plant-like piece that was highly cantilevered. To do so, I had to work in stages from a wide base that would support the anticipated asymmetrical weight distribution. It took a few days as I allowed each extension to dry and solidify for the next. The exterior was built from square rods of about 10cms length joined peripherally and end-to-end over a central cylinder extended as I progressed. Together they provided the strength to support the arm, but added substantial weight to the cantilever. Eventually, I recentered the arm close to the base and ruminated about my finale. With a bit of serendipity, I pieced and shaped the end as you see it now. The title and colours just followed.
Airbrush stains on BRT fired to cone 6.

ANOTHER TIME AND PLACE
Was the first piece I sculpted after 20 years away from pottery. I thought I would build it in slab strips as if it were a vessel form, but my natural inclination toward asymmetry and movement found me shaping the exterior in abstract pieces of clay. When I had mostly formed the exterior, I contemplated what I’d fill it with and came up with the vision of swirling tendrils rising from a central column. Thus was the beginning of my use of twisted square “coils”. The one-directional slant of the tendrils, lobes of the rim and tilted, offset base enhanced the illusion of windswept movement. The earthy sprayed stains played off the forms,
The title evokes the primordial theme of origins in a strange, early evolution.
BRT fired to cone 6.

INSEPARABLE BOND
My second piece developed from a desire to create a globular form with a hint of traditional pottery styling. Yet, I didn’t want the form to show smooth curves and lines that begged for glazes. It was built up from joined ribbons of clay that were carefully expanded outward with a technique I’ve learned to create tiers of cracks in all directions. When the vessel reached its apex, I closed it in with random pieces of clay to create a rocky terrain. I then just applied additional pieces around the body and base to simulate outcroppings. The airbrushed stains create a holographic effect depending on one’s point of view in moving around the sculpture. The green stain tends to stay on the left and the red on the right. The colours symbolise the connection between life and the earth, of which, we are an inseparable party.
BRT fired to cone 6.

STRATA
I combined techniques of tiered ribbons of clay with surmounting twisted coils to fashion an uplifted piece reminiscent of the twisting crevices seen in ancient volcanic rock that interplay with even older strata of layered rock. The surface shows terrestrial colours washed by falling water. Hopefully, Strata, like all my pieces, evokes memories of glorious places visited via its textures, shapes and colours. And it introduces a touch of symbolism about our societal behaviours with a wink.
BRT fired to cone 6.

ELDERS’ FIRE
The world abounds with eternal sacred places tucked away in corners off the beaten path. Elders’ Fire is a fire circle in a lofty grotto where tribal leaders meet to share lore and wisdom. It is only accessible through a small portal normally blocked by a hefty rock that implies collaboration.
BRT fired to cone 6.

ALTAR OF LAVA
In the spirit of Elders’ Fire, this piece evokes the tradition across ancient cultures to attribute our existence and experiences to earth deities. The temple-like ambiance of the form derives from abstracted coils of lava and a hidden heart of fire. With their spiraling reddened tips, the coils are alive with foreboding or hope dependent on belief rather than rationality.
BRT fired to cone 6.

PILLARS OF ERIN
As many have seen the fabled Giant’s Causeway on the northern coast of Ireland, I too cherished the expression of form in the ancient natural columns of crystallised rock. My technique suited the creation of a tall monolith alluding to both the columns and the life around them, including grasses and kelp in the adjacent sea.
BRT fired to cone 6.

MONOLITH TO A DEITY
A piece that I created before it reminded me of images I had seen of Pre-Columbian deities, which were often abstractly depicted in ceramic paintings, especially among the cultures of central America. Most had a certain ferocity about them whether related to life, fertility and the underworld in the Mayan and Aztec pantheon of gods – at least by western standards. The wavy vertical coils represent movement or dancing, the frequent rite of celebration or worship in human history.
BRT fired to cone 6.

SEE ANEMONE
Tentacles waving in subtle sea currents, yet fossilised in ancient stone. If unearthed today, we’d be intrigued by its colours and forms. And since it would be transfixed from eons ago, we’d search it microscopically for the lessons it could teach us about life before humans, an always intriguing pursuit. You are invited to see what this contrarily heavy sculpture shares about movement, surface and colour, while remembering that anemones are predatory by nature.
Made from squared coils shaped and backed while rising in continuous lines.
BRT fired to cone 6.

CARMEN
Carmen resonates as the fiery gypsy in Bizet’s opera or the dynamic Carmen Miranda in her over-the-top, colourful headdresses. This piece evokes the female form in a curvy, lively way, yet stays true to the earthy theme of my work. That Carmen is a homophone of the colour carmine is a bit of fun as well…..cha, cha, cha.
BRT fired to cone 6.